We have to know ourselves first before we get to know the world.

In our busy lives, preoccupied with deliverables and outcomes, and forces that diminish our autonomy and authority, we forget to question the very essence of our existence. We react but hardly pro-act to the human condition. Where the newest fashion in business and in government is to talk about ‘comprehensiveness’, ‘behaviour change’, ‘sustainability’ and ‘holistic-approach’ to policy and strategy, these words hardly embody the work, attitudes and lifestyle we choose to lead. We instrumentalise the notion of education and prescribe creativity here and there, hoping to be more like Google. We label and package, but hardly internalize and embody the slogans we carry.

What does cosmopolitanism have to do with all this?

Being ‘Cosmopolitan’ is an active verb, acting on the grounds of particular subjectivity and values that it embodies.

In its core, the cosmopolitan outlook has two values – 1) value of valuing and 2) the value of reflecting on value – in other words it is a mode of valuing the present and positions one to reflect on value itself.

These form the basis of ‘reflective openness’ which process in itself opens up an important space for mindfulness and vulnerability. And as human beings, we need to feel vulnerable and we need to challenge ourselves constantly. This is where education has an important role to adequately provide the space and freedom where value could be expressed and also challenged through dialogue…

In searching for space and freedom, I pursued the Philosophy of Education postgrad summer school and immersed myself in the unknown unknowns, within the depths of Roehampton University’s forest campus! A week-long emersion in nature – reading, discussing and self-reflecting – I had opened the depths into my soul  where I could aspire toward the cosmopolitan subjectivity and begin to embody its notion.

… and if you ask how cosmopolitanism can be practically applied, then you have missed the point!

Cosmopolitanism is discussed within in political, moral, cultural and economic contents, which are nevertheless rooted in the idea of universal human community.

Thus, cosmopolitanism is not an abstract idea that has no bearing on our lives, political affiliations and economic ideology. A cosmopolitan community could be based on an inclusive morality, a shared economic relationship, or a political structure that encompasses different nations. Though a more positive vision of the cosmopolitan community is one in which individuals from different nation-states form relationships of mutual respect and mutual understanding of values. But what does it really mean to have mutual respect and how deep is this concept?

Does our society embody this notion of mutuality and why is it important?

We consume defaced westernized Chinese food… jump around to the ‘hip’ Balkan rhythms played by clueless hipsters… complain about our IT problems to a guy based in Bangladesh…and nonchalantly doze off to Beethoven with our ‘noise canceling’ headphones …  thinking and priding ourselves of being truly cosmopolitan! … but are we? Do we really embody the concept or just label or consumption behaviour as appreciating other cultures?

Just because we bump into each other on the streets doesn’t make us cosmopolitan, doesn’t make us better humans and using the hollowed-out popular vocabulary certainly doesn’t add to our social or environmental progress. We have hollowed out the sense of community and live by standards and slogans that we don’t embody… are we seem too busy to stop, step back and reflect on our own lives, on our own purpose and society? We don’t know our community or our planet because we simply don’t have the “luxury” to know ourselves.

O my friend, why do you who are a citizen […], care so much about laying up the greatest amount of money and honor and reputation, and so little about wisdom and truth and the greatest improvement of the soul, which you never regard or heed at all? (Socrates)

Knowing thyself is an essential approximation and a necessary aspect of living a good life. That is opening yourself to understand the value of life, challenging your own restricted vision of the world, accepting your human limitations and embracing your vulnerability. Be open to confess that “[you] know nothing except the fact of [your] ignorance.” Be wiser and do not fancy that you know what you do not know. Be true to yourself and be vulnerable.

Being vulnerable makes us better, truer to ourselves and helps us live a better life by building stronger connections and more sustainable communities. Socrates dedicated his whole life to exploring what it means to be wise and what it means to live a good life, which didn’t necessarily make his life utopian but demonstrated that humans can do more than simply survive and exist but also esteem, share, appreciate and love…That is sharing and love not just restricted for the immediate circle of self and family but directed at community and nation.

I went, and sought to persuade every man among you that he must look to himself, and seek virtue and wisdom before he looks to his private interests, and look to the State before he looks to the interests of the State; and that this should be the order which he observes in all his actions… (Socrates) 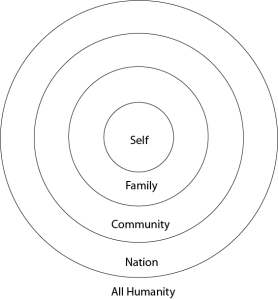 Its notion may entail a sense of world government, but to me cosmopolitanism is more of a perspective and subjectivity that must be embodied to be able to reflect more critically on the world and the self. It is not something that could be packaged and applied, rather it is a subjectivity and attitude that requires to be internalized and embodied. Being cosmopolitan is a pro-active verb. Cosmopolitan perspective has a behavioural aspect and should not be a declared label!

Reflecting back on the space and freedom that PESGB summer school gave me in thinking this through, I want to believe and uphold that going back to fundamentals is not and should not be a privilege… I challenge all of us to simply make time to think and reflect openly. I advocate for education as an approach and the school as an institution that should provide for the freedom and space where reflection and dialogue could take place and build our cosmopolitan prism. We have to know ourselves first before we get to know the world. It is our prism that makes what we see of the world, but you first need to let the light in.

We can do more than exist but esteem, share, appreciate and love – imagine broader horizons!

← PlamenArt
how I found meaning through art →