“Learning from Alasdair MacIntyre”: a reflection on ISME’s annual conference

On July morning, over 60 philosophers, theologians, students and humble fans gathered for the twelfth consecutive year to celebrate and learn from the work of Alasdair MacIntyre. Unlike many other conferences, the International Society for MacIntyrean Enquiry has managed to attract people from both sides of the spectrum – Thomists and Marxists, theologists and lawyers, senior and aspiring scholars…and a number of followers all over the world.

Alasdair Macintyre is a Scottish philosopher, recognised as one of the most influential living philosophers. He has written on ethics and morality, political philosophy, theology, and the history of philosophy. His most popular book, After Virtue (1981) helped to fuel a resurgence in Virtue Ethics and since then has been cited in almost every field of study – from the field of theology, sociology, and philosophy to professional studies on business, law, medicine and accounting.

Not many living modern philosophers have a dedicated society of followers. MacIntyre’s appeal is due to his broad theoretical and practical scope, balanced arguments, practical wisdom and ability to revive and make visible the importance of classical texts in relation to the conflicts of modern society, that his work is so cherished and pursued in a variety of fields.

His philosophical framework allows the possibility of spiritual belief, commitment and understanding of what it is to be a human being. More than any other philosophers, MacIntyre keeps on the table questions that relate to ordinary human life. He sees theory to help practice – to understand itself better and to lead a better life.

“Alasdair MacIntyre is the smartest man on earth” – said one of the most influential theologist Stanley Hauerwas, in his closing keynote.

Voices from the Conference:

During the conference, I had the opportunity to speak with a number of leading thinkers in philosophy, as well as practitioners and aspiring academics interested in pursuing MacIntyre’s arguments in their field of practice.

While strolling around the beautiful campus, I asked two leading scholars, Joe Dunne and Ronan Sharkey to reflect on the relevance of MacIntyre’s work to our modern society and professional communities.

MacIntyre’s theory helps us think about how to live a better life and how to die a better death, which is not abstract questions – they are very attached to our physical existence, and the way that we understand and act in our daily lives. Professor Dunne recognises that MacIntyre keeps on the table questions that concern ordinary people, because “the real philosophers are everybody…we all have to live our lives.” He sees the purpose of theory to help practice – to understand itself better and to help advance. In a way, his work helps ordinary people, who are practising a particular craft, to think about – what does it mean to do things well?

“It is important to realise that reflective thought is a practice and an action. This is something we need to keep a hold on,” says Professor Sharkey. Thought has been popularly misconceived as disengaged, where genuinely reflective thought is an engaged practice which is part of what it is to be reflective human being. If you are going to engage in such thought as part of professional practice, one needs to have a critical perspective on the way that the profession is run, on the standards of those who practice it and the ethics – the ends to which it is devoted.

We need to ask a serious question of any profession “whether or not being a good professional (ex. lawyer) is a good thing to do?”

MacIntyre’s framework to reform the way we think about professions:

I have been particularly drawn to MacIntyre’s work because of the way he sees theory as related to the issues of everyday life and social practices, and further emancipates philosophy from the constraints of its modern professional status.

Working in the context of professional ethics, in the case of accounting practice, I have situated my work in MacIntyre’s criticism of modernity, to illustrate his point about the disappearance of an ethical framework within accountancy, and the separation between moral and practical reasoning, which has made ethics appear as an atomistic concept having no bearing on cognitive capacities and motivations of professionals – creating only outward behaviour.

In my previous blogs, I have drawn on MacIntyre to make visible the normative nature of professions – as the hosts of social practices, defined around the ‘incommensurable goods’ that they provide to society. I believe that his socio-cultural approach has significant implications on the way ethical competence is conceptualised, and on the way conditions are fostered to allow for such ethical responsivity. MacIntyre work asks us to consider more critically and holistically the reasons, conditions and practices of the whole system which initiate individuals into practice and through which practitioners develop ethical responsivity (even before they are faced with an ethical dilemma). This is why I have focused my interest on the role of professional bodies, like ICAEW, as not only a standard-setter but as having the potential to embody the deliberative platform that could lead the normative discourse in the community of accounting practitioners and reform standards of excellence. One such project is already underway – read more about the AuditFutures programme. 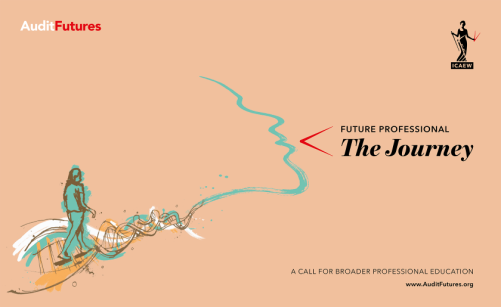 ICAEW report on the Future Professional: The Journey

← The Business of Teaching

One thought on ““Learning from Alasdair MacIntyre”: a reflection on ISME’s annual conference”